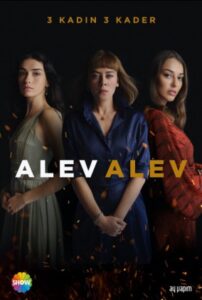 The serie Alev Alev is broadcast on the Show TV screen and is produced by Ay Yapım. It is the adaptation of the French series The Bazaar of Charity (Netflix).
Its title means Fire or could be understood as Burning Fire, other possibilities are Sisters or After the Fire.

The novel is in its first season and it is not yet known how many chapters it will have and that will depend on the rating in Turkey. Follow the link below to watch it subtitled in english for free.

The lives of three women from different worlds are connected by a fire.
Cemre (Demet Evgar) who is suffering from her husband’s violence and is trying to get out of it and run away with her daughter.
Rüya (Dilan Çiçek Deniz) is a spoiled girl who has had privileges and an easy life so far, she will come face to face with the reality of life.

Cicek ( Hazar Ergüçlü ) a somewhat superficial girl will have to mature and find herself and her true personality.
The three of them are in a fire and from that moment on everything will change in their lives and they will have to grow up, look for justice, fight for love and happiness. 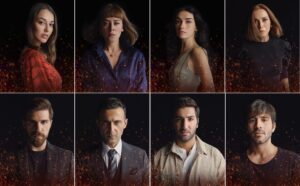 The shooting of the factory fire scene, which takes place in the first chapter, took 10 days, and the total preparation of the scene took exactly 2 months. The entire set and costumes were specially prepared with flame-resistant protective elements.