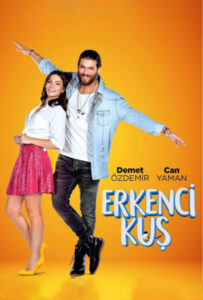 Erkenci Kuş is one of the most recent Turkish drama that has been a success. It was completed in 2019. It was broadcast by Star TV and produced by Gold Film.
Erkenci Kuş is the original name of this Turkish drama, but, it has been marketed equally under the name Daydreamer and in Spain as Dreaming Bird.

This Turkish comedy tells the story of the romance between a humble young woman with a dream of becoming a writer and the son of a wealthy advertising agency owner. It all begins when Sanem Aydın is threatened by her parents with a forced marriage if she doesn’t get a steady job.

That’s when Sanem must stop working at her family’s store to find an offer that will bring her better benefits and reputation.
For this reason, and also because she wants to help her family financially, Sanem takes advantage of the fact that her sister Leyla works in an advertising agency and does everything possible to get a job there as well, thinking that by doing so, she will be able to escape an unloved arranged marriage.

However, what the charismatic girl least imagines is that she will meet the love of her life, Can Divit, who is one of the two children of the owner of the company. A free-spirited man who is dedicated to photography and travels around the world, but who will change course because of his father, who asks him to take over the business for a while.

Interesting! The drama was cancelled in Turkey, but its fans are asking it to continue!
The series has been a success beyond Turkey, but in its country of origin it had a rating drop that caused its producer to decide to end it in episode number 51. However, its fans have not been satisfied and have begged through social networks for the series to have a new season.

Some have even asked Netflix to rescue it, including it in their catalog. In Spain, Turkish novels continue to be very popular and the rating of this novel was sky high, so many people are asking Netflix to buy the novel, make a new season and allow it to have a better ending than the one given by the producer.