Kara Sevda is a Turkish television series from 2015, won the international Emmy award as the best novel 2017 in the 2nd season.
It was called Blind Love, Eternal Love, Stolen Love or Time to Love depending on the Latin American countries where it was broadcast. It starred Burak Özçivit (Kurulus Osman) and Neslihan Atagül (Sefirin Kizi).
The plot is very captivating, with a lot of suspense and at times it takes on the tone of a thriller and like many Turkish novels it has an unexpected ending!
It was issued in 2 seasons of 74 chapters.

Kemal is a senior student in mining engineering, when he meets the millionaire Nihan. They have an affair until Kemal goes to work in a mine in Zonguldak. 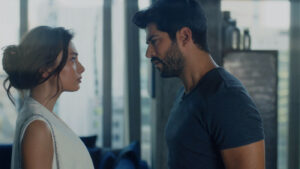 Emir Kozcuoğlu has been in love with Nihan since childhood. The family will pressure the girl to marry him.
Kemal progresses in his work as an engineer and five years later, he returns to Istanbul as a partner in the company. Nihan and Kemal will meet again and the obstacles and disagreements will begin.