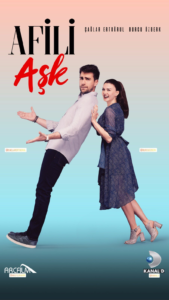 Afili Ask is from the romantic comedy genre. It was presented at the Cannes Film Festival under the title “Love Trap”. Its name has been translated as Star Love. This serie is produced by ARC Film and each episode lasts approximately two hours.

This drama had only one season of 38 episodes.

It is a story that tells the life of Ayse a girl with two older brothers whom she fears, so, fleeing from them and a forced marriage, she decides to leave her home.

On the other hand, there is Kerem, the womanizer son of the businessman for whom Ayse works. In a confusing situation when Ayse runs away, the brothers believe that she does it out of love for Kerem. For the honor of the family they will demand that Keren and Ayse get married.

Kerem wants to show her father that she can settle down. So Ayse makes the decision to marry the son of the factory owner where she works. The young people come to an agreement that will last 6 months. The “supposed” husband is handsome and wealthy, although he is not willing to lead a real home life.

However, what begins with a mutual agreement, in which the apparent marriage is only carried out for convenience between the parties, takes another direction. In this way, Ayse and Karem’s life is turned upside down.

This formula has gained the sympathy of the audience and everyone wants to know how this peculiar story will end and how many turns it will take before its end.

The drama has already had its scandal: 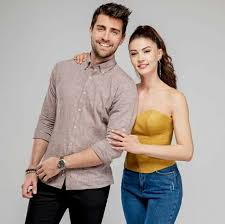 Now, unfortunately for all his fans, the actor already has his heart occupied, as he is committed to Kayla Manukyan.

This love brings him his problems, since the fans do not want his girlfriend and some do not hesitate to offend her through social networks. This made Caglar so angry that he even blocked some of her followers.

Also, the subject of his girlfriend has brought him problems with the producer of the novel, and they have stopped following each other on IG! although they have not made any statements as to what the reasons are.

Curiosities about the actors who are the protagonists of the drama

Its male protagonist is Turkish actor Caglar Ertugrul, who discovered a love for theater and acting while studying mechanical engineering. His previous success in drama was Mrs. Fazilet and her Daughters.

This handsome actor, considered one of the most attractive men of 2018, has a penchant for social networking, so he has his own YouTube channel and his account on Instagram.

As for Burcu Özberk, she is an actress who has participated in different projects for theater and TV. She has a large following and shows her proud family on her Instagram regularly.

Her acting performance has brought her several nominations in different awards and in 2016 she won the Most Beloved Actress Award in Makinistanbul Media, Arts and Sports.

Unlike her fellow Afili Ask, Burcu seems to be single, enjoying life as an individual, dedicated only to her career, for the time being.